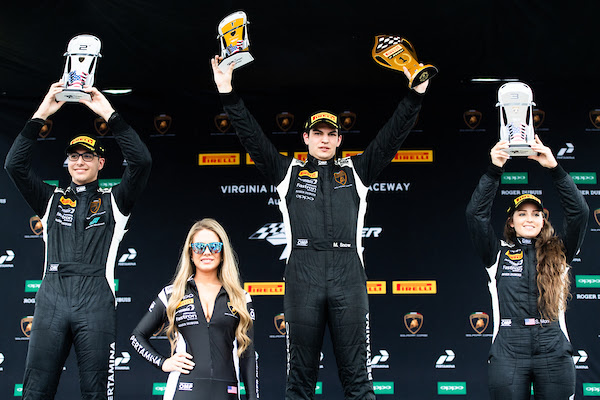 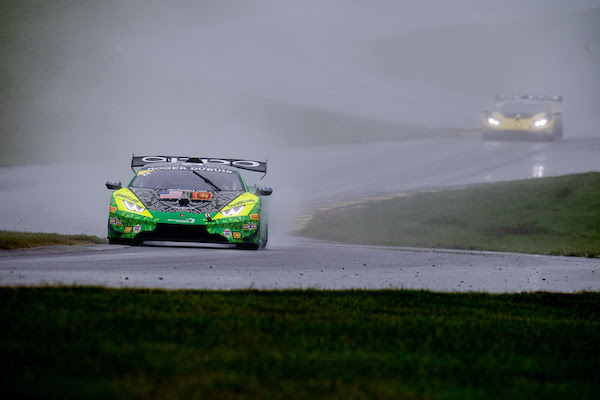 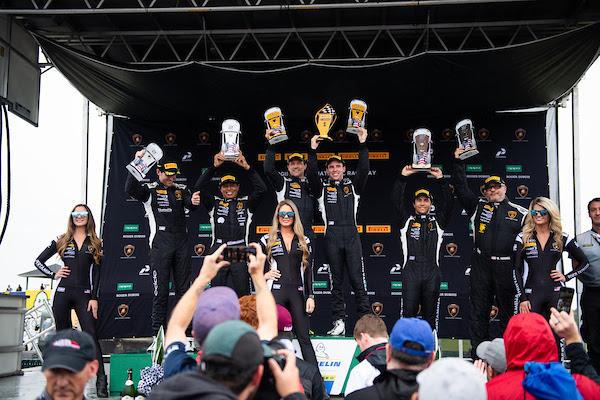 Ockey and Eidson Score Sixth Win of the Season in ProAm

Alton, Virginia (Saturday, August 24, 2019) – All five US RaceTronics drivers did phenomenal jobs in tough conditions at Virginia International Raceway in today’s late afternoon race in order to bring the team’s three cars home on the podium. Patrick Liddy started the race P4 overall and first in the ProAm class in the No. 24 Elephantea Lamborghini of La Jolla. Steven Aghakhani was the team’s second-fastest qualifier, starting the race seventh overall and first in the AM class. Damon Ockey rounded out the field, starting the team’s other ProAm car in ninth-place overall and second in class.

Ockey and Eidson, the ProAm points leaders, started furthest back in the field, but Ockey drove a flawless first stint in tricky track conditions, handing the No. 09 Lamborghini of Vancouver over to Eidson as soon as the mandatory pit window opened. Eidson wasted no time in moving through the field and assuming the class lead on lap 16. Eidson continued to push hard for the remainder of the race bringing the car home for the pair’s sixth win in seven races and extending their points lead to 38 points over second-place.

Liddy and Atapattu had the opposite pit strategy for the race, with Liddy running deep into the pit window while the track conditions were at their best. Liddy brought the car in from first, but didn’t have quite enough of a gap to hold off Eidson after the driver change. Atapattu drove a strong second stint, keeping the car clean and consistent enough to earn the second straight second-place finish for the No. 24 Elephantea Lamborghini of La Jolla.

Aghakhani had a strong first stint and came into the pit stop running first in class and fifth overall. The team had a great pit stop, but came out just behind McKay Snow dropping the No. 6 Lamborghini of Beverly Hills down to second in AM class. Aghakhani and Snow were in a heated battle when Aghakhani dropped a wheel off and spun in turn 11. The talented youngster was able to recover and rejoin the race, despite damage to his car. He was strong the remainder of the race and was able to hold off the competition to earn his fifth straight podium.

The team will be back in action tomorrow morning at 10:55 a.m. EDT for the final race of the weekend. Make sure to tune into the live stream at: http://squadracorse.lamborghini.com/en-en/live-streaming

Damon Ockey – “Race 1 today at VIR went pretty good. Started out pretty uneventful for us with the yellow. It was a little wet at first on slick tires, so the first few laps were pretty slippery until the race line started to develop and we were able to pick up the pace. I was able to get around one car before I brought the car in for Jake. Jake put down a bunch of really fast laps and brought us up to P5 overall, first in class and that’s how we finished.”

Jacob Eidson – “Great race! Damon had a really clean start; a really clean driver change and yeah… We were trying to battle to get on the overall podium. There wasn’t quite enough drama up front to make it happen, but overall, I’m really happy. We had a really fast lap time. The car was great and I’ve got to thank US RaceTronics for that. Hopefully tomorrow we can do a little better.”

Patrick Liddy – “We had a great race, great result with a P2 finish. We put like three laps on third-place, so that was pretty darn good. Ron drove a great stint. It was really tricky conditions at the start, so I was kind of holding back and keeping it safe. Had a good race overall. Nothing went wrong with the car and no one went off, so happy with the result.”

Ron Atapattu – “We had one good trouble-free run the rain… semi-rain here at VIR. Patrick did a great job in qualifying and the first stint to put us in the perfect position to bring the Elephantea car home second. I’m already looking forward to tomorrow’s race.”

Steven Aghakhani – “Race 1 went fairly well, you know, tough conditions. The guys and myself were really trying our best to work with it… do the best you could. Had a little spin off turn 11 and hit the tires. It took a little while to get the car sorted back out and I had a little damage to the wing, fenders and bumper, but that’s just racing. We’re dealing with the conditions. We’re going to come back tomorrow and put this all behind us.”

Shane Seneviratne – “It was a little eventful at the start with the conditions, but all the drivers did a great job. We made a good start… made great progress. Patrick Liddy drove a terrific first session and handed the car in good condition to Ron and they were able to bring the car home in second place. Damon Ockey got a good start as well. He handed the car over to Jacob in second-place in ProAm and Jacob did a fabulous job moving through the field and getting the car to fifth overall and first in class. Steven was driving extremely well, unfortunately he got a wheel onto the wet surface and went off track. He was able to get back on track and finish the race really strong in second-place in AM. I’m really happy everyone got on the podium and we’re looking forward to a good race tomorrow.”

####
*Photos Courtesy of Jamey Price
About US RaceTronics

All Three USRT Entries on Podium on Sunday at Road America